In the 30 years we have been making and selling shooting benches, mostly at gun shows, we have heard plenty of wild stories about the traditional method of resting a rifle on the hood or some other part of a vehicle. 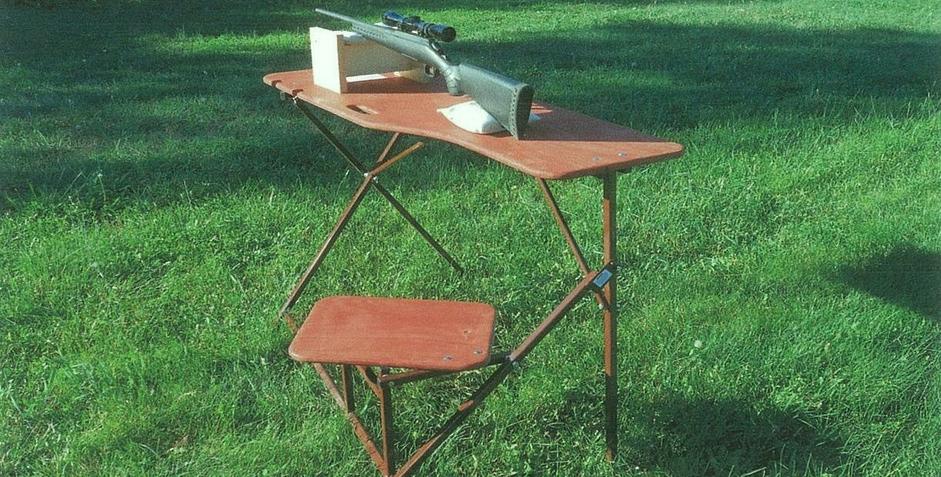 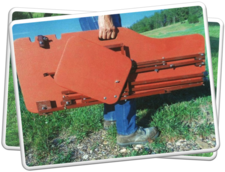 I was walking along the firing line at Shootists Holiday 2014, checking out the vast array of guns, when I came upon an unusual shooting bench. Initially it appeared to be too simple and compact to be effective, but after watching it in use, I was fascinated. The tag on the top surface identified it as a "Model 2000 Portable Shooting Bench" from Knothole Designs in Alva, WY. Later, I googled Knothole Designs, and called up the proprietor, Jim Gotsch. His price for the bench was most reasonable: $100, plus shipping. I promptly ordered one for review.  Several days later, FedEx delivered a large flat package. Within five minute of the FedEx guy's departure, I had the bench completely assembled in my living room. But there is a secret, Included with the bench, there is a set of instructions, with photo illustrations.The secret is to read the instructions. They are very simple and straightforward. Only five wingnuts are employed in order to put the whole unit together.  There are even two extra wingnuts screwed to the bottom of the bench, in case you misplace one of the originals.The only way you can mess up is if you start unscrewing anything that isn't a wingnut. The moral of this story is:  Read the Freakin' Manual! Several days later, I took the Model 2000 bench out to my favorite shooting spot in the desert.  The best part of having one's own portable shooting bench is, any un-populated location can become your own target or varmint range.  My shooting buddy, Jim Sanchez, and I put the bench through its paces with both rifles an pistols, and we can both testify to its solidity and stability.  You don't have to climb over any structural members to get into position; you just sit down. It was quick and easy to set up from its folded-flat configuration, and just as easy to take down and stow flat under the truck bed cover. If your local gun club range is too distant, too crowded, too expensive or non-existent, the Knothole Designs Model 2000 portable shooting bench is a practical and affordable alternative. I totally recommend it.

​Gun Shows We Will Attend

Buy ​at show - save shipping​

Bullet holes, powder burns, cracked and broken windows, mirrors shot off; this practice can be embarrassing, expensive, and potentially dangerous, and at best does not work all that well for eliminating human error in aiming.  For sighting-in, load development, long range varmint hunting and other shooting practices other than actually stalking game, there is no substitute for your rifle sitting on firm sandbags on a solid shooting bench while utilizing adequate eye and ear protection and a big measure of common sense.

Available in Right or Left hand

​​While it is impossible to build a portable shooting bench that will be as steady as a permanent bench, the 2000 comes very close.  Generally the stability of a portable bench is in direct proportion to its weight.  The 2000's integral seat uses the shooter's weight to pin the bench to the ground, in effect creating a bench/shooter unit that weights 200 pounds or more. Angular bracing reduces vibration to an absolute minimum.  With practice, the Model 2000 can be set up or taken down in about a minute.  Wing nuts on five captive bolts hold it together in the set-up position; two extra wing nuts are provided.  A double tripod design allows it to be set up on uneven ground, but we recommend shooters do carry a few small wood blocks for leveling.

Our first portable shooting bench was sold at gun shows in 1990 and was made entirely from wood. Following the success of that bench, Knothole Designs LLC was incorporated in Cody, Wyoming in 1993 and began manufacturing and selling the Three Point shooting bench with steel legs.   While shooters still swear by the Three Point shooting bench for its simplicity and ease of set-up, we were not satisfied with its stability.  In 2001 the bench was replaced with the Model 2000, which we have been selling ever since with only minor changes to the basic design.

Knothole Designs offers other products at gun shows:  gun racks, ammo loading blocks, gun vises, sand bags and sand bag rests, and target wickets.  All of our products are made in-house at our Alva, Wyoming location.

E-mail address:  knothole93@outlook.com    All e-mails are answered as soon as practical.  If you do not receive a reply within a reasonable time, check your spam file or contact us by telephone: (307) 467-5635